skip to main | skip to sidebar

I've been thinking about these two topics a lot lately, for two different reasons. I've just finished writing Glass Slipper, which will be available from Resplendence in November, and which features a big, beautiful heroine and a hero who prefers his women on the chubby side. I've just started writing All Steamed Up: Infernal Devices, which will also be released by Resplendence, in February of 2011. Infernal Devices also features a heroine who isn't slender. As a reader, I felt a bit of a gap in books that features heroines who look like me, so I set out as a writer to correct that, to some extent. But in writing it, I've learned a lot. I've realized how we de-sexualize fat women in our society. I've realized how the harmful attitudes about sex and women that persist to this day in Western culture are continuing to influence writers and readers, even when we don't realize it.

One of the very persistent and harmful stereotypes that persist toward fat women is that our sexuality is never depicted in a sex positive way. Movies and tv routinely show fat women who are either delusional about their sexual attractiveness (because, by virtue of being fat, they are never desireable and should not find themselves so) or desperately horny (because no man will sleep with them). Fat women in movies are reduced to charicatures or sexual predators, so desperate for male attention that we would practically rape a man-- and would have to-- in order to have a sexual encounter.

Our bodies are also under attack in the media as being dirtier or smellier than thin bodies. In the movie Bring It On, there is a scene in which it is implied that a male cheerleader, when lifting a female cheerleader over his head, is putting his finger into her vagina. This scene bothers me on so many levels already (it is clearly depicted as being an unwanted violation, but it is still played for laughs and considered funny by other characters when it's discussed), and more so when I compare it to another movie, Dodgeball. In a scene in which Justin Long is shown trying out for his high school's cheerleading squad (in order to impress a pretty, thin cheerleader), he is asked to lift an overweight classmate who tells him, with a leer, that she is not wearing underwear. He is unable to lift her and when she falls it is implied that his face is pressed against her bare vulva. The characters who view this incident are horrified and disgusted.

In Bring It On, the female cheerleader in question is a thin girl who is the token "slut" character. However, her "hotness" makes it acceptable for her to behave in a sexually promiscuous manner. In Dodgeball the girl is fat and assumed to not be attractive to anyone on the planet, and so her sexuality is a joke, and the thought of touching her genitals is disgusting.

I will always write characters who have different types of bodies, because all bodies are beautiful, no matter if they're thin or fat, large breasted or small breasted, tall or short, flabby or muscular. They're all machines that work the same way, more or less, and they all have sexual components that are good to touch, fun to play with, and capable of bringing us great pleasure. Humans are, for the most part, sexual beings who delight our in bodies. We need to start remembering that, instead of shaming all women for their sexuality.

For more interesting thoughts on the subject of women's bodies, visit this excellent and thought-provoking article at The Rotund.
Posted by Abigail Barnette at 8:40 AM 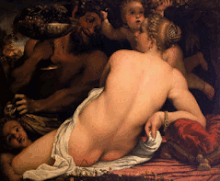